In India,we have hundreds of islands in the coastal region,as well as in the deep sea. Indian Islands in the deep sea were activated by operators (both DX and VUs) many times since Indian Independence. All these Islands have IOTA listings. Some activities in the Coastal Island Groups have taken place too and their listings are also given.

In addition, we had 24 Indian Antarctic Expeditions too, to bases like Indian Bay Camp,Dakshin Gangothri, and Maithri in the 7th Continent. This year,(2007-09), the 25th IAE Team is in Maitri Base. 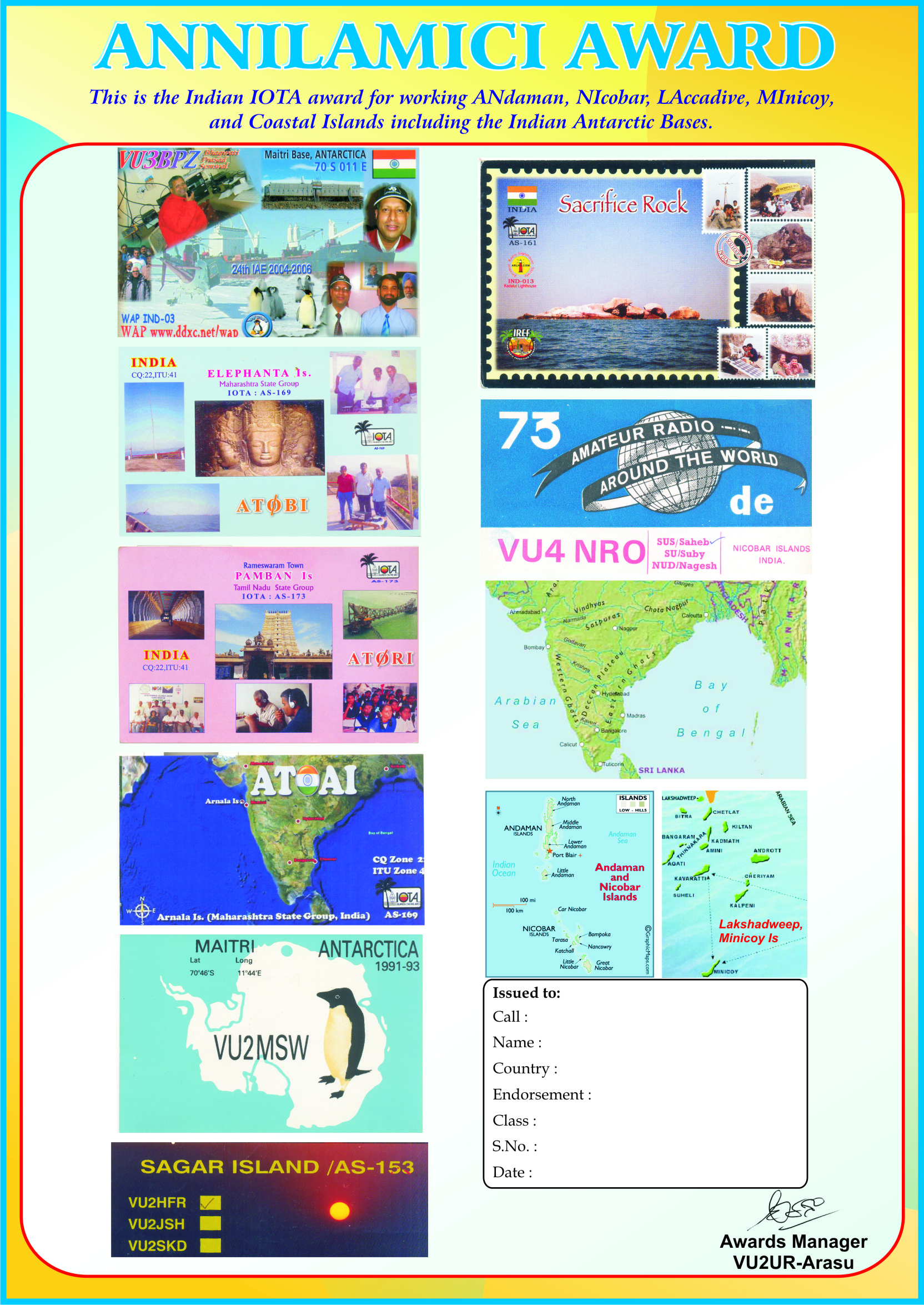 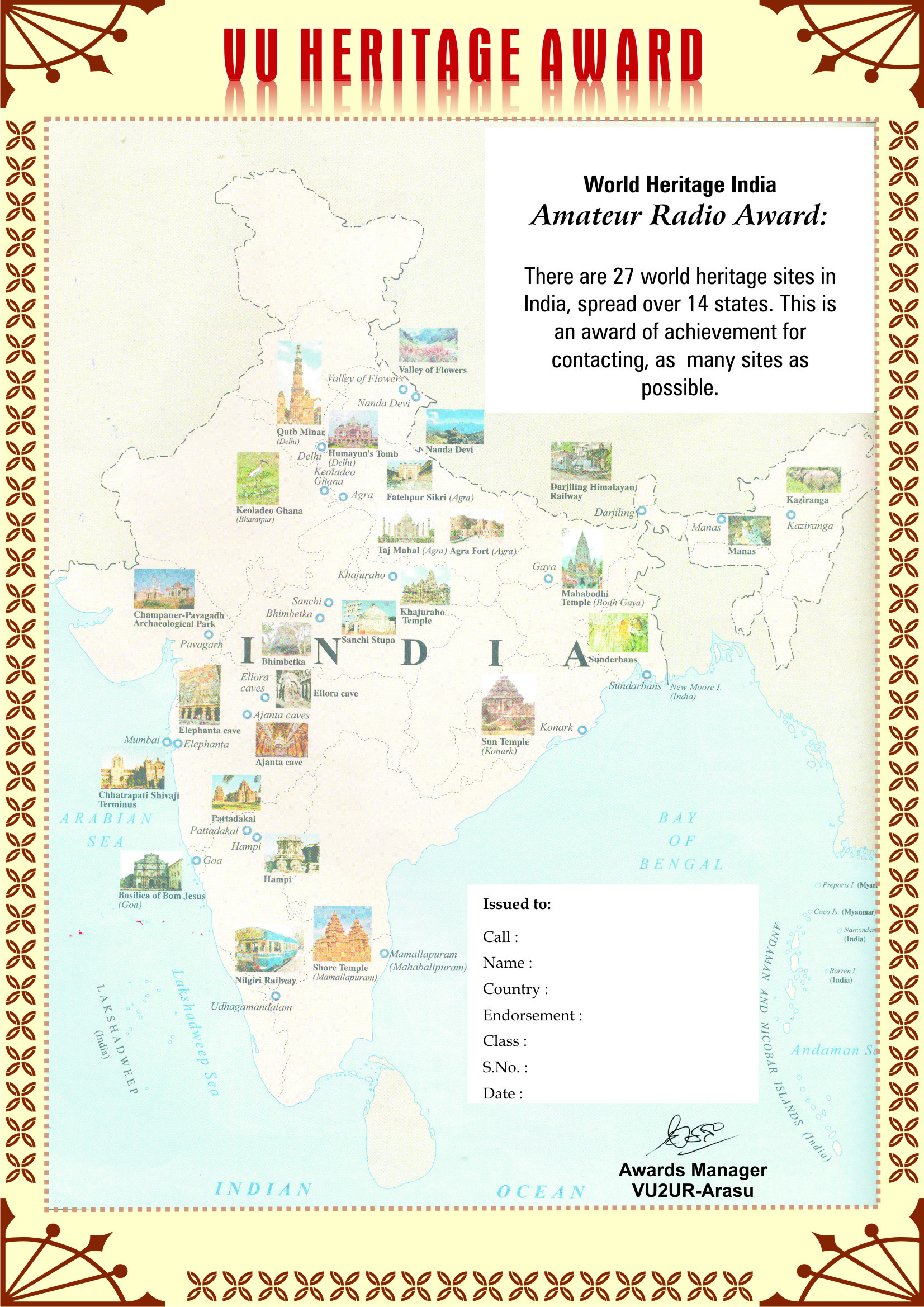 Duplication: Duplicate QSO's with the same call sign are NOT ACCEPTABLE for scoring.

QSO Points System: A system of scoring is developed, from which you can score the Confirmed QSOs you have with the Indian Islands, as given below. The Islands that have been frequently activated have less weightage to those which are activated the least.

1. Any Confirmed QSO with Indian Islands, before 15th August 1972, counts as follows:

2. For confirmed QSOs with a Coastal Island group(only one expedition QSO is counted per island), on any date, counts at 15 points each.

4. For any confirmed contact with a LOCAL ham resident of the Island/ or Official posted in Andaman & Nicobar, Lakshadweep, Minicoy and Coastal Is , with valid address printed on the QSL, is 15 points,Examples VU2,4 and 7 for suffixes GV,DIA,FBZ/FB,JPS. (VK9NS operations from VU2JPS is not considered)

5. For any confirmed QSO with a Resident Mainland Indian with VU2.../VU4, VU2.../VU7, call in the Andaman, Nicobar, Lakshadweep and Minicoy Islands, is worth 15 points.,

6. Any QSO with expeditions of VU2ANI,VU2NRM,VU2KV,VU7WCY/RM,VU7US,VU2GDG, etc.. from any of the Islands count for 20 points

Band endorsement Single or All bands; is available.

BASIC: If you have confirmed QSOs with any THREE groups. For example:(i) Andaman (iii)ONE of the Coastal Is Groups, then, the number of points required for the or Nicobar Is; (ii)Lackshadweep or Minicoy Is, “Basic Award” is a minimum of "50" points. Minimum 3 QSL cards needed.

SECOND: If you have Confirmed QSOs with ANY THREE of (1) Andaman or Nicobar or Lakshadweep or Minicoy Is Groups,(3) any TWO of the Coastal Island groups,and one Indian Antarctic QSO, activated till date of application, the number of points required for the “Second Class Award” is a minimum of 90 points. Minimum of 6 QSLs needed.

FIRST: If you have confirmed QSOs with each of Andaman, Nicobar, Lakshadweep and Minicoy Is Groups, THREE of the Coastal Island groups,and two Indian Antarctic QSOs, activated till the date of your application,with over 120 points,you get "FIRST Class Award". Minimum of 9 QSL cards needed.

EXCELLENCE: If you have confirmed QSOs with EACH of Andaman, Nicobar, Lakshadweep and Minicoy Is Groups, FOUR of the Coastal Island groups,and two Indian Antarctic QSOs, activated till the date of your application, you get "EXCELLENCE Class Award". Requirements, for this class is a minimum of 150 points. Minimum of 10 QSL cards are needed.

Award upgrade from one class to another, is by a new certificate and endorsement only. No stickers are available. In case, you qualify for FIRST class Award, there is no need to get the Basic and Second Class Awards.

AWARD MAILING: The award would be of "A4" size (210x297 mm), in multi-colour. From the experiences of many amateurs, it is seen that Postal Transit Losses and folding/mutilations are very common/frequent. To avoid this sort of a loss or mutilation, this award is issued in the ELECTRONIC FORM and sent to your E-mail Id, ready to be downloaded at your end, in “pdf” format.

VU7LD (Lakshadweep Is) had 20 plus VU operators in December 2007 operating from Kavaratti Is.

PROOF OF QSOs/QSLs: Scanned copies of QSLs are to be E-mailed, to The Awards Manager, for scrutiny to “VU2UR@)rediffmail.com”,or “Manohar_arasu@yahoo.co.in”.

Award Fee is 7 latest IRCs or Bank's Demand Draft for 7 US$ 0r 5 Euros to be sent to VU2UR's postal address(by Registered post only, as the pilfereage in postal transit is TOO much).Green Stamps are NOT to be sent under any circumstance, by mail.


The first series of Six Awards contained: SAARC Award, Himalaya-Hind Sagar Railway Award, VU-10 Million PIN points Award; World Heritage-India Award; ANNILAMICI Award and Worked VUFF Award. The interest shown by the world of amateurs, is very encouraging. The following seven awards in Electronic form, contain five simpler awards for working various VU Islands, like VU4, VU7 and Coastal islands. The other two awards are for working VU Amateur Radio Contesters and the City of Bengaluru. No QSLs required. No date limit.All bands all modes including WARC bands OK. Endorsement for single mode, single band can be given. Only Electronic Award. in "pdf or jpeg" format will be mailed to your E-mail Id.

Please read the requirements of each award. Check from your VU log, and you may be qualifying for more than ONE award. I request all of you to send your VU log to me first, I will check your log and would notify you about the number of awards you can claim. You can send ONE GCR list, claiming more than one award, after my checking your VU log. If you are claiming more than three awards, the question of your sending the award fee, gets easier. For those claiming less than three awards, IRC mode may be convenient. The fee for 3 awards is 3 Euros; for 4 awards- 4 Euros; for 5 awards- 5 Euros. For 6 or 7 Awards also --5 Euros only. This can be sent via Western Union transfer to the following name and address, of giving full details the sender and his full address:

My E-mail Id is vu2ur2009@rediffmail.com

Please do not send any Green Stamps or Euros in snail mail, which are always stolen in transit. 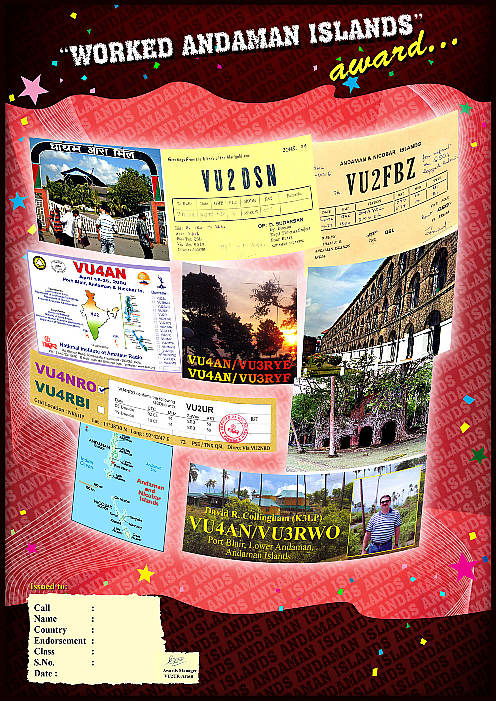 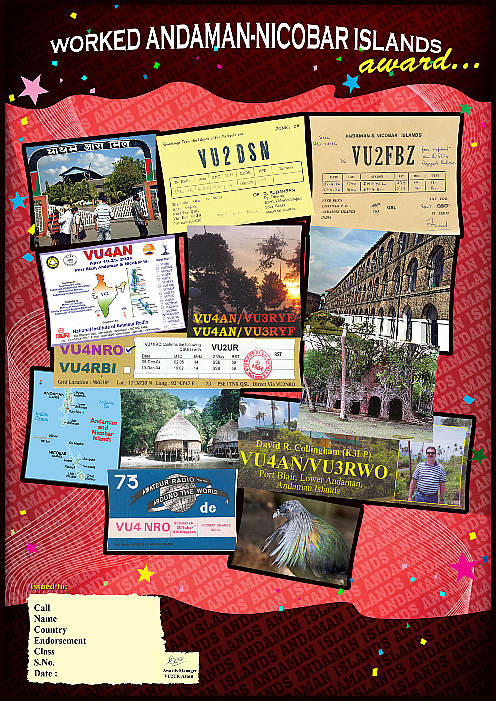 For Basic Award, you need 4 different Andaman and 1 Nicobar QSO. 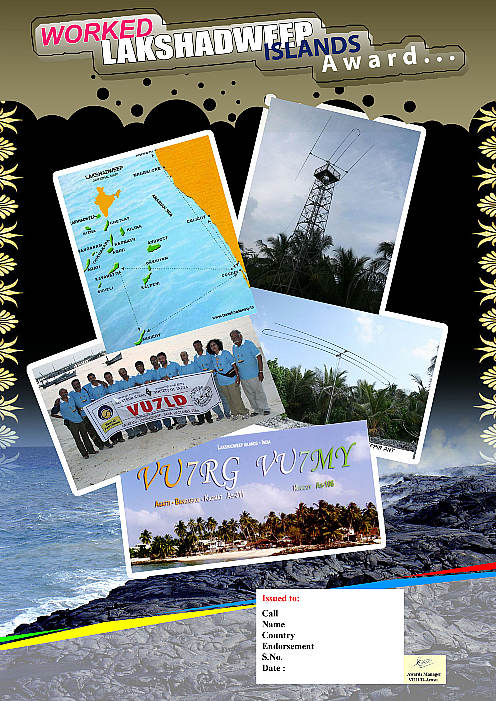 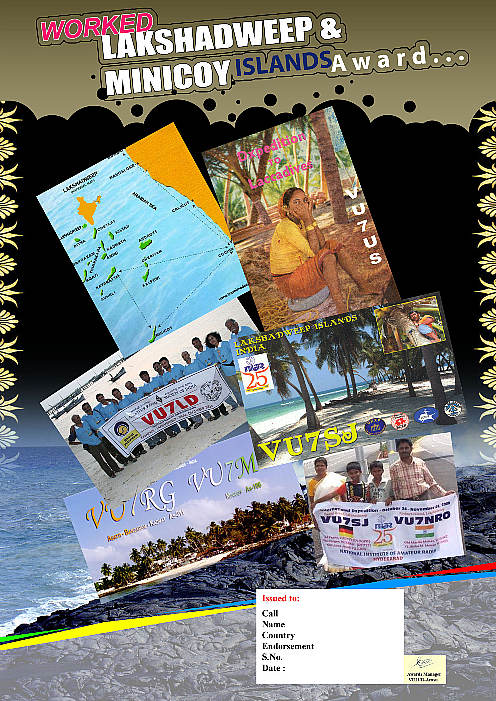 More than one QSO from the same island, but with a different call sign is OK 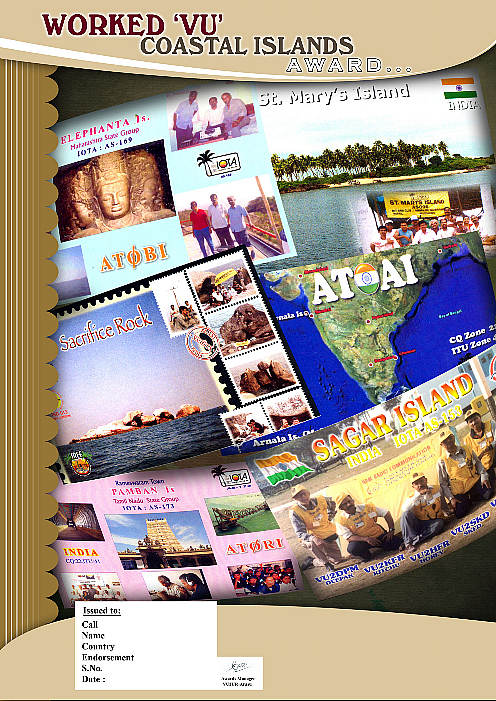 There is a new generation of VU amateur radio contesters. They are contesting in CW, SSB, and Digital modes in various International Amateur Radio Contests. Some of them are:

Requirements: Work any 3 different stations from the above list, in any one or more Contests, (giving the name of the contest), or non-contest QSOs, too are valid. No QSLs required. No date limit. All bands all modes OK.

Endorsement for single mode, single band can be given.

The city of BENGALURU( a k a BANGALORE ) the capital city of the State of Karnataka is known as the ELECTRONIC CITY or GARDEN CITY or SILICON CITY or IT CITY of India. The city has over 1500 amateur licence holders QRV in VHF/UHF/Satellite / CW/SSB/and Digital modes.

The very active stations from this city were/are:

Requirements: Work any 2 different stations from this city.

No QSLs required. No date limit.All bands all modes OK.

Endorsement for single mode, single band can be given.